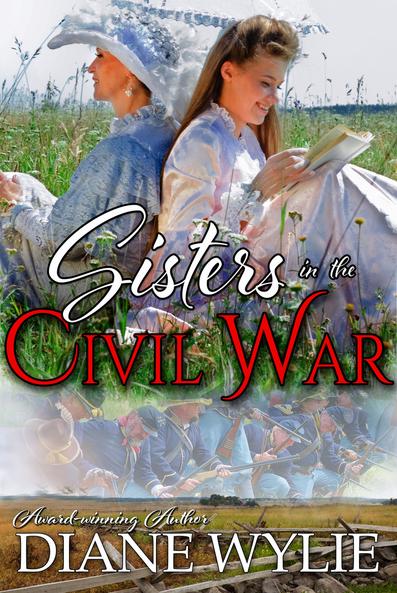 Sisters in the Civil War

​
​Click on the links below to purchase a book:

Purchase Sisters in the Civil War from Amazon (Kindle edition)

Excerpt from Sisters in the Civil War

​As they munched on the bread and slowly walked without a destination,

the sound of excited voices caught their attention.

“We’ll whip them Rebels in a month and send them with their yellow-bellied tails between their legs, see if we don’t!”

A crowd of young men had gathered in front of the telegraph office, reading a bill that was posted on the wall. They pounded each other on the back and threw their hats in the air.

One of the young men stopped his whooping and hollering long enough to notice the Lawson girls. He looked at them closely then wrinkled his long nose with disdain. “You might be pretty enough little gals, but you sure are dirty, and you smell bad. Why, my own little brother smells better than you.” Having said his peace, he brushed by them to catch up with his friends as one group moved off, talking of honor and glory, and other men moved in to take their place at the wall.

Christine’s vision blurred with tears. She hadn’t had a bath in a week. Anyone would smell bad if they couldn’t get a bath or clean their clothes. She took another bite of the bread, but it didn’t taste as good as it had. Then she read the bill posted on the wall. The State of Pennsylvania was raising a regiment of infantry soldiers and they were looking for men between the ages of sixteen and thirty-five. The sign said that an enlistment fee of one hundred dollars would be paid with a monthly wage thereafter.

“He’s right, Chrissy,” Francine said a in trembling voice, “Come on.” She tugged on Christine’s sleeve and turned away from the boisterous young men.

“Wait, Franny. Take a look at this bill.”

Christine urged her sister closer, pushing her way through the throng and earning a few scowls.

The Union, it MUST and SHALL be PRESERVED!

Volunteers for the WAR are wanted IMMEDIATELY!

Enroll in the 28th Pennsylvania Infantry.
​
Now raising for the WAR!

A $100 Bounty Paid by the Government.

One hundred dollars each … they sure could use that kind of money. The Army also gave you a uniform and food too … and a place to sleep. Christine sighed, if only she were a man, her troubles would be over.