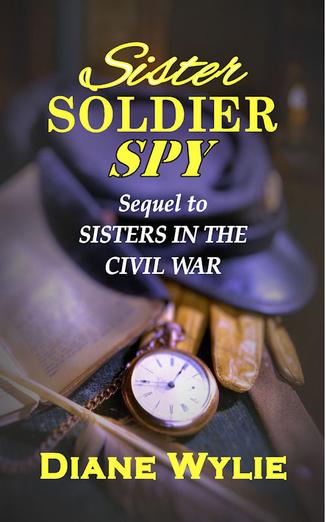 Christine, aka Chrissy, Lawson’s heart raced, and her palms perspired

immediately. She wiped away the moisture on her blue uniform pants.

“I’ll do it, sir.” This could be a great adventure. Joining the Federal Army was never boring … sometimes it was heart-pounding scary, but never dull.

“Fine. Fine. A nice young soldier like you will be a welcome addition to the U.S. Balloon Corps.” The disheveled-looking civilian who had introduced himself as Thaddeus Lowe rubbed his hands together like a child with a new toy.

“We cannot just turn over one of our soldiers to you without clearing it through the commanders of the Twenty-Eighth Pennsylvania Infantry, sir.” Corporal Ryan Bishop, Chrissy’s particular friend and now her superior officer, expressed this concern as his brow furrowed and his mouth turned down.

Chrissy, who was known as “Chris” and as a man by the U.S. Federal Army, dared not look at Ryan. She had been minutes away from a private rendezvous with him after seeing her sister Francine and Franny’s new husband, Eli Moore, off at the Gettysburg train station.

Already Chrissy missed her sister. They had been through everything together—the deaths of their mother and father, homelessness and hunger, disguising themselves as boys to muster into the Twenty-Eighth Pennsylvania Volunteer Infantry in Philadelphia, learning to behave like men, and even killing the enemy.

But Franny, known to the Union Army as “Frank” Lawson had fallen in love with a fellow soldier, Eli Moore. Eli had been the first to discover the ruse perpetrated by Chris and Frank Lawson to obtain food and clothing. Soon, Frank gave up the pretense and returned to the female world as Franny. The friendship between Eli and Franny intensified, and now they were married. They had tied the knot in a quick and private backyard ceremony after a horrific battle had resulted in the loss of another Yankee friend, Grandpa Sam.

These people Chrissy loved were gone from the Army. Franny was gone. Grandpa Sam was gone. Eli was gone …

“Corporal …” Mr. Lowe’s voice snapped Chrissy out of her thoughts.

“Corporal Bishop, sir, would you allow Private Lawson to ascend in this balloon, the United States, for a trial run to see if he can tolerate the height without illness? Not everyone can or even cares to go up so high.” Mr. Lowe’s hands waved up and down in all directions as he spoke with actions as well as words.

Now Chrissy had to turn her gaze to Ryan to see his reaction.

The worried expression remained on his handsome face as their eyes met.

“Do you really want to do this, Private Lawson?” His voice was quiet and gentle.

Such a caring man.

She smiled and nodded, which made her glasses slide down her nose. “Yes, sir, I would like to try.”

“… great conflict, great characters. Loved the ride-or-die family mentality, the love between Ryan and Chrissy, and the action of the book.” Brooke Crites, Reviewer/Editor www.proofreadingbybrooke.com