Purchase REDEEMED from Barnes and Noble (paperback only)

Long pikes hit the ground behind him. The horse could run faster

than a pike could be thrown, but arrows were a different story. One

arrow protruded from the leather saddle, and one lodged painfully

in Finlay Graham’s thigh. Thankfully, only the top had gone into his

flesh. He would deal with it later. The English soldiers chasing him

took all his attention.

Finlay Graham smiled and pressed his face on the lathered neck

running through the thick weeds. He could leave the path and

lose them, but he wanted the bastards to follow. His plan was working.

Slowing the horse to prevent killing it, he kept riding north, drawing

the English further from Dunnottar Castle and the cottage in the

woods where his family lived.

How he hated these invaders of Scotland, these English soldiers.

But he had to make one exception for his sister Isobel’s love,

Derek Sinclair. In actuality, Derek was no longer an English soldier.

the Graham family from capture by Colonel Morgan. Since Sinclair

no longer needed the red coat, Fin had taken it. He had been able

Leaving his family had been difficult, but as a single young man, Fin knew where his duty lay. He alone could protect his father, brother, sister-in-law, sister, and their ward, little William Ogilvie. By default, Derek Sinclair, who was with Isobel, would benefit as well.

Twisting, Fin glanced behind him. He was getting too far ahead of the four soldiers. If he lost them, they could well turn back and go after the Grahams once more.

Sitting straighter in the saddle, Fin relaxed his legs and loosened his grip on the reins, letting the horse slow even further.

He eyed the arrow stuck in his leg. It hurt and had to go. Falling off the horse and driving the thing further into his leg was not an option.

Letting the reins rest across the horse’s neck, he reached up and untied his neckcloth. Then he wrapped both hands around the arrow shaft.

With a mighty yank, the arrow was out. Quickly, Fin pressed the cloth against his thigh as blood bubbled out of the hole in his leg.

The horse tossed its head and pranced sideways, the whites of its eyes showed.

“Whoa, easy boy. It’s my blood, not yours.” Fin picked up the reins again and glanced behind him. Here in Dunnottar Woods, it was not easy to see for any distance with the thick underbrush in the way. Riding off the trail was also difficult. But Fin wanted to be pursued, so the trail was best.

A brief flash of red appeared between the trees. He touched his heels to the horse’s flanks and got it moving forward again.

Fin glanced skyward, but he already knew he probably would not catch a glimpse of his trained peregrine falcon, Grizel. Her call warned him of danger and told him she was ready to swoop down and sink her claws into an English soldier’s flesh.

He didn’t give her an answering whistle. Stay safe in the treetops, m’ lass. I’ll not have an English arrow take ye out.

A horse whinnied behind him, calling out to Fin’s horse. The English grew closer.

Hunger and thirst gnawed at Fin’s insides, but self-preservation was more important. He kicked the horse into a gallop, splashing through a small stream then up the slight bank to the other side, forcing the animal to keep moving, despite its efforts to stop and get a drink. Fin knew it needed water, but now was not the time.

An arrow ripped through the sleeve of the red coat, nearly unseating him.

The horse picked up speed.

Thirty minutes later, Fin decided it was time to lose his pursuers. He left the trail.

Picking out a zig-zag route between the trees took more time, but the shadows were lengthening, and he wanted a safe place to spend the night. They had been climbing higher into the hills, exposed to view as the trees thinned.

No arrows had cut him down.

More and more rocks and pebbles littered the ground. Fin slowed the pace. Splashing through another small stream, the horse suddenly slipped and pranced in a panic.

He pulled it to a stop and dismounted in the water, hanging onto the saddle for a moment before putting his weight on the injured leg. It throbbed, but held him upright.

Letting the horse drink, Fin glanced around him. Somewhere on his travels, he expected to pass out of the Scottish Lowlands and move into the Highlands. Tales told at Dunnottar Castle, where he grew up, spoke of strange mystical things in this mountainous part of Scotland. Changlings, faeries, kelpies, and ghosties were just a few of the creatures living here. As children, he and his siblings loved to hear these stories but were secretly glad to live far away from such things in their Lowland castle.

Now, he headed toward this unknown land with only his horse and falcon for company. 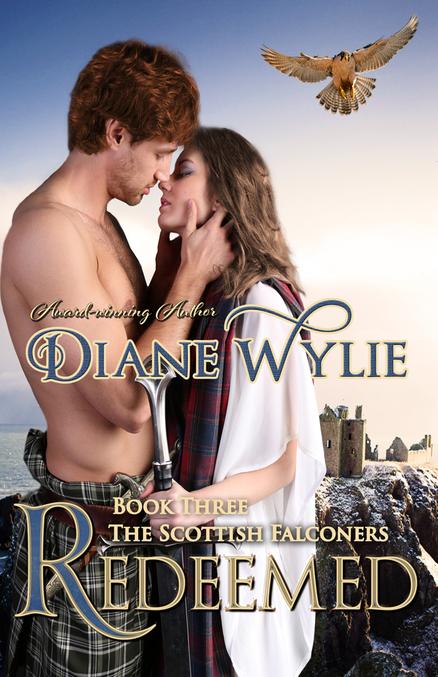