​Purchase HUNTED from Barnes and Noble

Panting heavily, Isobel Graham ran through the brambles and brush,

splashed through a small stream, and scaled the muddy bank before

reaching the spot where her peregrine falcon, Latharna, had brought

down a large duck. The falcon had already begun to pluck out the

dull brown feathers of its prey.

her head and regarded Isobel with her black eyes for a heartbeat or two.

Then she spread her large gray and brown wings, soared a short

distance, and landed on Isobel’s gloved hand. The falcon immediately

jesses on the birds legs between her fingers to keep the falcon with her.

“Och, Latharna, I didna think ye’d come to me. That’s a good girl.” Isobel sucked in another breath. “I’m wishing we had a bonnie retriever dog to chase down the kill.”

Isobel had lost her falcon during the siege at Dunnottar Castle a month ago, but the bird had found the Graham family again as they headed north, away from the carnage.

Still carrying the falcon, Isobel stepped over and picked up the dead duck by its feet.

“My brother Rabbie would be happy to ken ye found us, just like his Brisda found him. He helped me train ye, do you remember?” Isobel stroked the falcon’s breast with one finger before placing the finely tooled leather hood over its head. Latharna would be calmer now that she couldn’t see.

Dunnottar woods stretched out dark and gloomy for miles around her as Isobel trudged back toward the camp where her father and brother were waiting. Occasional shafts of sunlight broke through the tall canopy of fir, elm, spruce, and oak trees that thrived here.

The majestic falcon rode easily on Isobel’s leather glove-covered hand as she walked over tree roots and stone. There was no path to follow, but she remembered going past the forked chestnut tree, so this was the correct direction.

Isobel put down the duck and bent to pick up a few chestnuts from those littering the ground under the tree. She stuffed them in the pockets of the boy’s breeches she wore. The nuts would be delicious when roasted. Traveling folks needed to help themselves to food when it became available.

Isobel jerked her head around to look at her falcon. Latharna rarely uttered a peep when she was hooded, and now she had sounded an alarm call.

The falcon’s wings fluttered and she shook herself in a rousing fashion. Something had disturbed the bird.

A faint, human cry of distress reached her ears.

It stopped, and then a few seconds later, she heard it again. Someone needed help. Grahams never turn their backs on someone in need.

Quickly, Isobel stripped the hood off Latharna, released the jesses, and jerked her arm upward. The falcon lifted from her hand and soared up into the sky.

Then she hung her duck from a branch by tying its legs with a leather thong.

Finally, Isobel retrieved her sgian dubh from the sheath at her belt. Now armed with her knife, she set off in the direction of the noise. 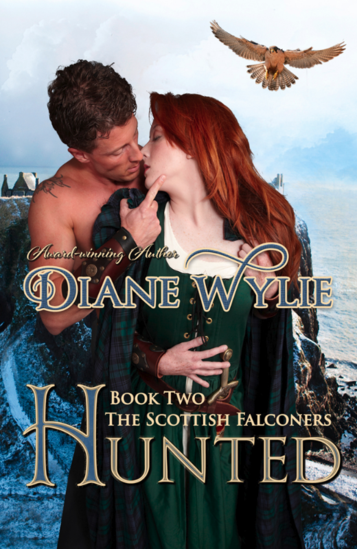