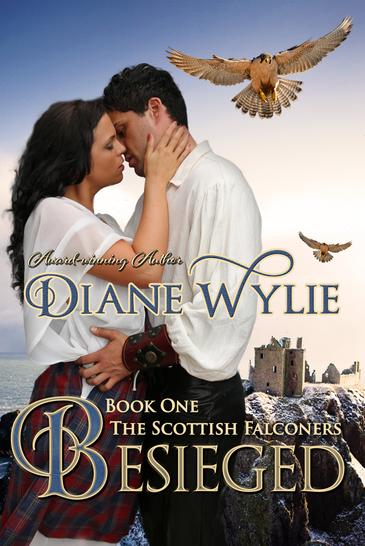 customer and caught the movement of something large out of the corner of her eye.

She turned her head, and her mouth dropped open at the sight. Riding past

their bakery cart was the most beautiful sight she had ever seen. A most

a white blaze down its face. Sitting on some sort of perch attached to the

saddle was a rather large gray bird. The bird had some sort of fancy cover

on its head and could not see.

“Did you never see the Governor’s falconers before?” Her customer asked.

“N-no, mistress.” Catriona’s face went hot. “This is my first time inside the castle walls.”

“Aye, and you’re not wanting it tae be yer last, so you’ll attend to business. Isn’t that right, Cat?”

Catriona quickly accepted the woman’s coins and turned to her father. “So sorry, Da, there’s just so many interesting things to see.”

“Aye, it will do no harm to be looking.” With a placating smile, she dropped the coins in her father’s big apron pocket.

Heat rushed up from Catriona’s belly to her face. There had been no such idea in her head. A husband was the last thing she wanted right now.

As she glanced over at her big bear of a father, the guilty look on his face told the tale. The woman had been correct about her Da. She mentally shrugged. So they were both appreciative of a finely formed Scots. Only he liked the females and she liked the males. For a long time, Catriona had hoped her father would remarry after her mother had died, but he had not, “found the right one.”

“We need not be rushing m’girl. There’ll be time aplenty fer her to wed.” With that, Cináed winked at his daughter.

Catriona huffed. “I’ll be wedding whenever I’ve a mind tae, Da. “Twill no be on yer terms, twill be on mine … and his.”

“And would you be setting yer sights on winning young Rabbie Graham to woo ye?” Her father enveloped her in a big, smelly hug, his beefy arms nearly crushing the breath out of her. “If I had such a braw son-in-law, we’d be wanting fer nothing. His father is the Grand Falconer, and his family serves Sir Ogilvie, who treats them verra well for those birds.”

“Want does he do with the birds, Da?” Catriona’s voice was muffled behind his mass.

“Take a look for yerself, lass. Ye kin see them from here.” Da released her and pointed to the right. They had a clear view of the open courtyard past the market. Two women held big birds, just like Rabbie’s bird, on gloved hands, while three men, Rabbie included, put the birds through their paces.

The red-haired young man had a long, thin rope with a brown-colored object at the end. Catriona could not tell what the object was from where she stood watching. The man pulled the object along the ground as he ran backward. Someone whistled and the older woman moved her arm upward a bit. The bird she held took to the sky.

Long wings beat the air then the falcon dropped down on the object and gripped it with its claws.

He extended his gloved right arm and whistled. The bird immediately left the ground, came to roost on the glove, and ate something from Rabbie’s fingers.

An older man walked over, and the three men conversed for a moment. When the two women came up, Rabbie transferred the peregrine to the older woman’s glove. She turned and walked away with her long skirt swirling around her legs.

The younger woman was dressed in breeches and boots like a man. This time, she let loose her bird while Rabbie ran and dragged the object for her bird to catch.

Catriona mused on how good Rabbie looked when he loped along, compared with the red-haired lad, who just looked silly.

For hours, she snuck peeks at the falconers while they worked and while she tended to her customers. The five people seemed so close-knit. Just then, Rabbie gave the red-haired young woman a big hugs. Catriona’s entire body went hot then cold.

Was that his wife? Her heart sank.